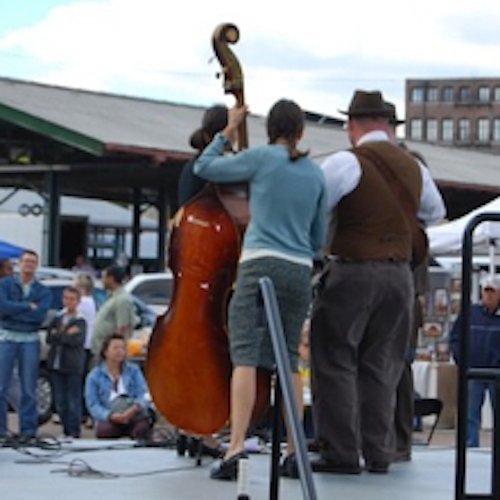 We heard the music before we entered the courtyard at City Market around noon today. When we exited through the doors into the sunny outdoor space I could see in front of me on a small stage a group of four musicians, tightly packed in a square facing a microphone, hammering away on a fast-paced bluegrass piece.

There is nothing better than live music, and the strong rhythmic sounds that set the City Market into vibration extended to everyone within earshot of the group which calls itself The Prairie Acre, based in Lawrence, Kansas. From my vantage point all I could see was the back of the group, specifically the northeastern part, consisting of Virginia Musser who was bouncing up and down and sideways while holding on and playing her bass. The other three, Noah Musser on Banjo in the southwestern corner, Greg Yother on guitar to the northwest, and Tricia Spencer in the southeast, were moving as well, but not with as much verve as Viriginia Musser. As the musical foundation of the group she used both bass and body to articulate the beat, in a way that parallels how Roger Federer plays tennis: there is a joy in her movements, a beauty that made me happy to be alive. And from what I could observe around me, the thalamic reflex (thanks Miriam!) was alive and well, too. Pretty much everyone who listened consciously or not was bouncing a foot, tapping a finger, or moving with their body to the sounds of this great band. Musser moves.

Sitting in My Car Having Lunch

November in the North Country