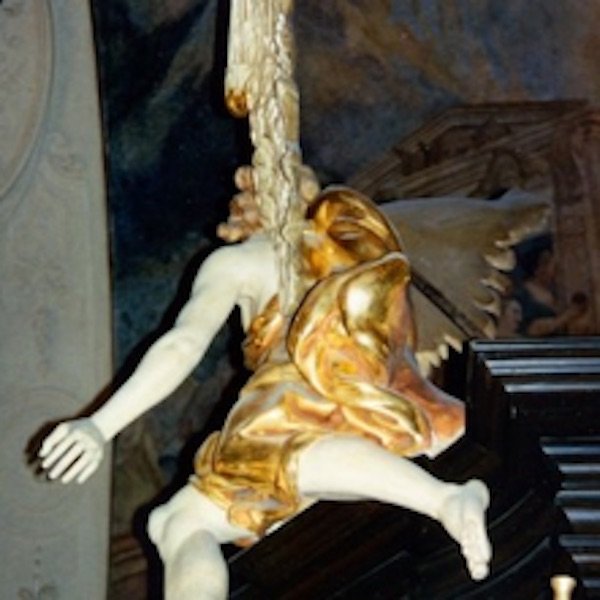 It should come as no surprise that Rome is a dusty city. All those tumbling fragments, the withdrawal of the water after a flood leaving a silt-filled city, the centuries of statues chopped to powder to transform gods and fauns into lime for cement. And not just statues, but buildings too, whole stone edifices turned to mortar. Imagine too what is lost in the recycling that occurred over the centuries, when spoils of one war became spoils of the next, when the façade of the pantheon was taken down and dragged uphill to become the façade of St. Peter’s, when the nails were pulled from the columns of the colosseum and melted down for Bernini’s saints. Or made into cement for a poor fireplace. A certain percentage of it falls away in chips of stone, and more in dust. It’s under my bed today in Rome; I put it in a plastic bag from the supermarket that says RISPETTARE L’AMBIENTE. And I do, I respect the environment like mad. In the US we call them dust bunnies, but what I am sweeping away from the corners, these dim gray things that line the walls of my apartment every other day, are dust gods and goddesses.


Grazia’s neighbor came up to her house to tell her not to flush the toilet. Between the first and second floor there was obviously a blockage, and nobody above there could flush. A few hours later the neighbor came back. You won’t believe what they found in there. I am sure I will believe it, I said. Tell me — it is a putto’s head. These things jam up the works in Rome. The traffic problem is really due to a superfluity of putti in the street, disguised as vehicles, especially the Fiat Cinquecentos. They fall from the ceilings of churches when they get tired after hundreds of years. They fall from the window sills of buildings into the fountains below. It’s a miracle that water flows at all. No, said Gra, that’s not it. It was a melanzana. No! It’s impossible. How could it get in there? Who would put an eggplant in the toilet? How could it fall in? Grazia had darker thoughts, but I said: Yes, it is unbelievable. It is not an eggplant, but the head of a small god.